The PDP-8a, was the last generation of PDP-8's that DEC produced. It was introduced in 1974 and was produced until 1984. It came in many different models with different memory configuration (both MOS and core), different back plane sizes and even with different CPU's. The PDP-8a features the same Omnibus as the PDP-8's in the generation before, this makes it possible to use a large portion of the boards developed for those. However, the PDP-8a uses hex-wide boards for some function. The new CPU KK8A and option 1 & 2 boards together with the memory boards are all hex wide.

I got mine together with the PDP-8/L in the spring 2010, but this was in much better shape even if some parts where missing. The programmers console and the I/O option board together with 16KW core memory was gone. The rest of the computer was fairly complete and I got books and software and a complete rack containing:

However the sheet metal plate sides where missing together with the rack header. I have borrowed a nicer rack from a PDP-11/34 to this machine.

This PDP-8a is a PDP-8A/420 which means that it's a core memory machine in the large chassis with a 20 slot back plane and a KK8A CPU. 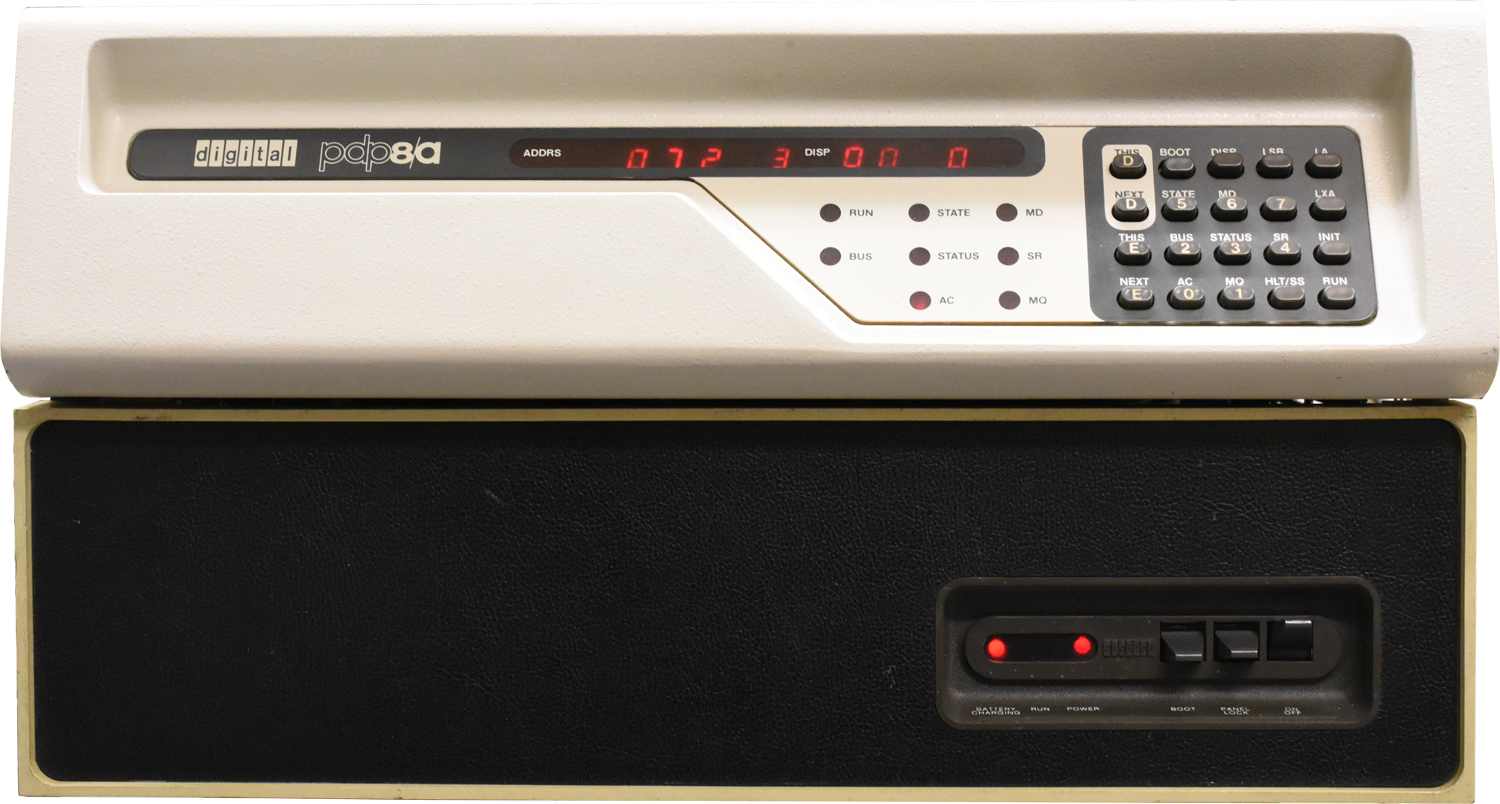 The most of the restoration of this machine was done during late 2013 until late 2014. 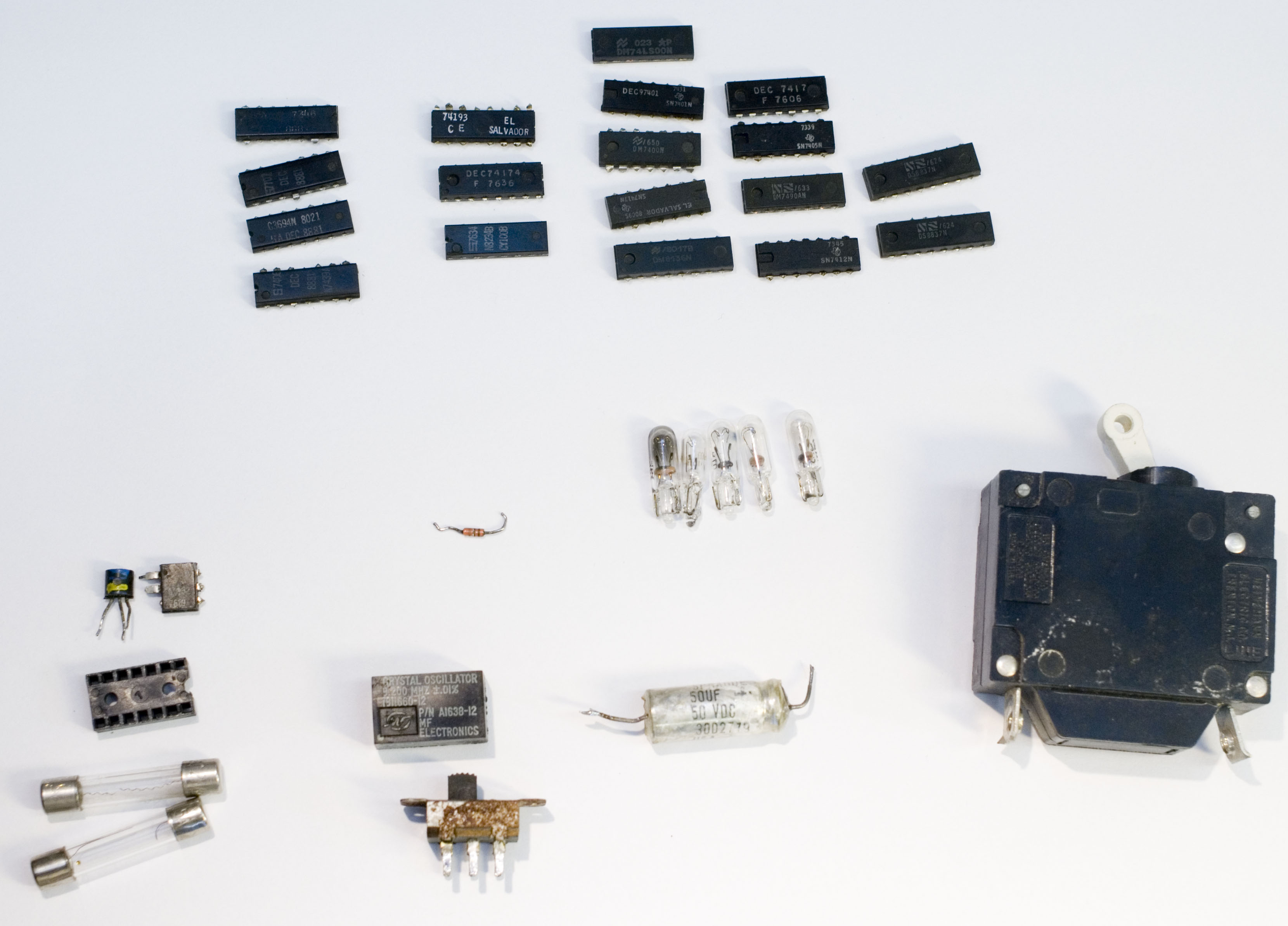 First I checked the power regulator boards (G8018). One had a bad capacitor and the other had a always tripping circuit breaker. I was given a replacement G8018 together with M8316 (DKC8A I/O Option board) from Mattis Lind at www.datormuseum.se. I could then build two working G8018 out of three. I then got lucky on Ebay and bought a programmers console and a 16KW core memory board for a reasonable amount of money. This made it possible to start debug the rest. I changed a fair amount of IC's on different boards, but there where more spectacular failures.

I found that the 8,2MHz oscillator on the RL8A disk drive interface board was broken. On the drives them self's I had to change a number light bulbs. I also found a bad soldering on one of the R/W modules that amplifies the signal from the heads.

Couldn't find any 8,2MHz oscillator with the correct packade. Found a surface mounted that I built a small PCB for. 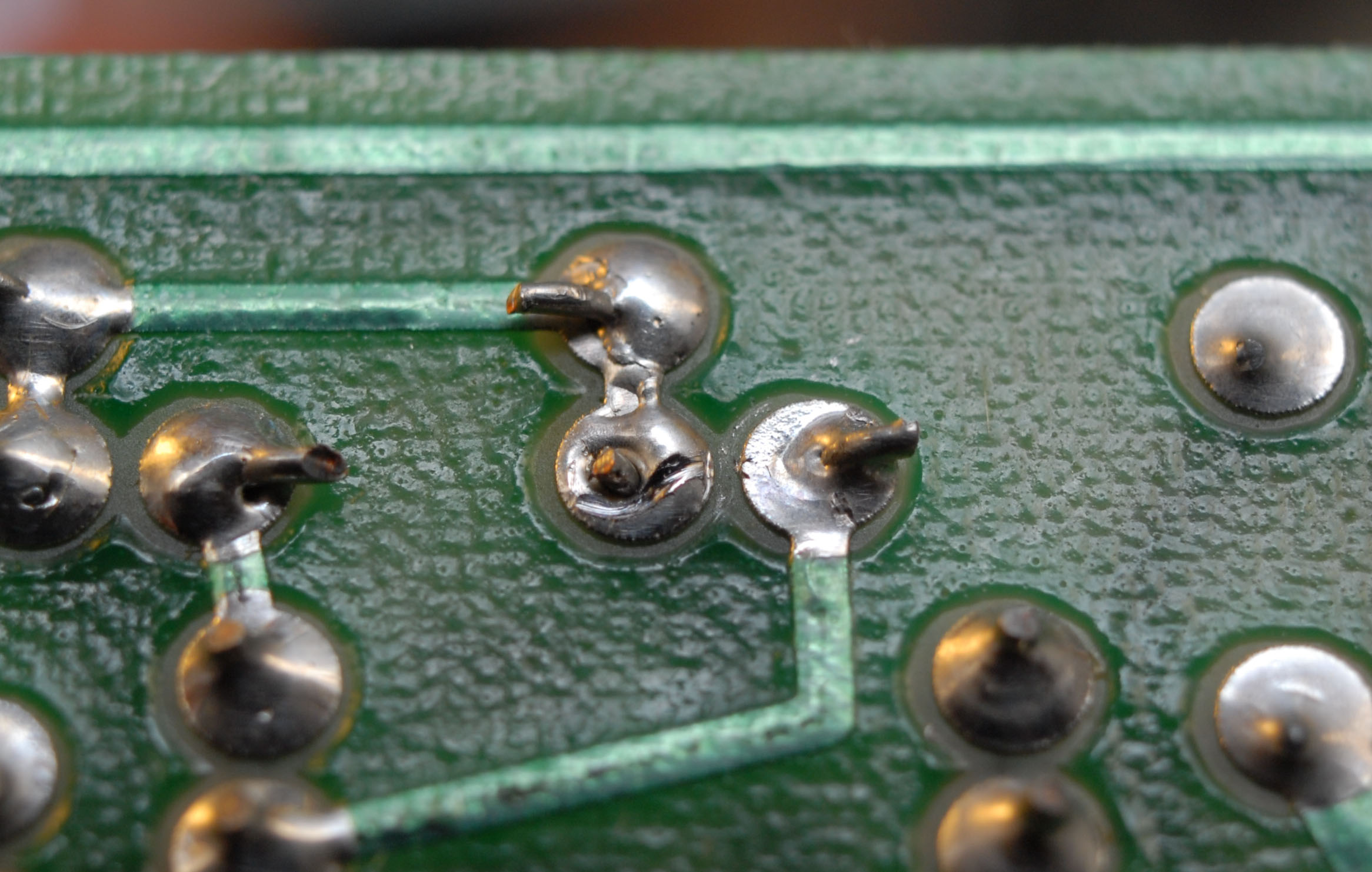 Found a bad (cold) solder joint, the drive worked occasionally. I could see the that the signal could come and go when I measured on it with an oscilloscope at the same time as I tapped on the board with my finger.

The power distribution board.

This board sits in the middle of the CPU-box. To be able to do anything on it the complete machine must been teared apart. I had three different breakdowns on this board. Each of them forced me to tear the machine apart completely. 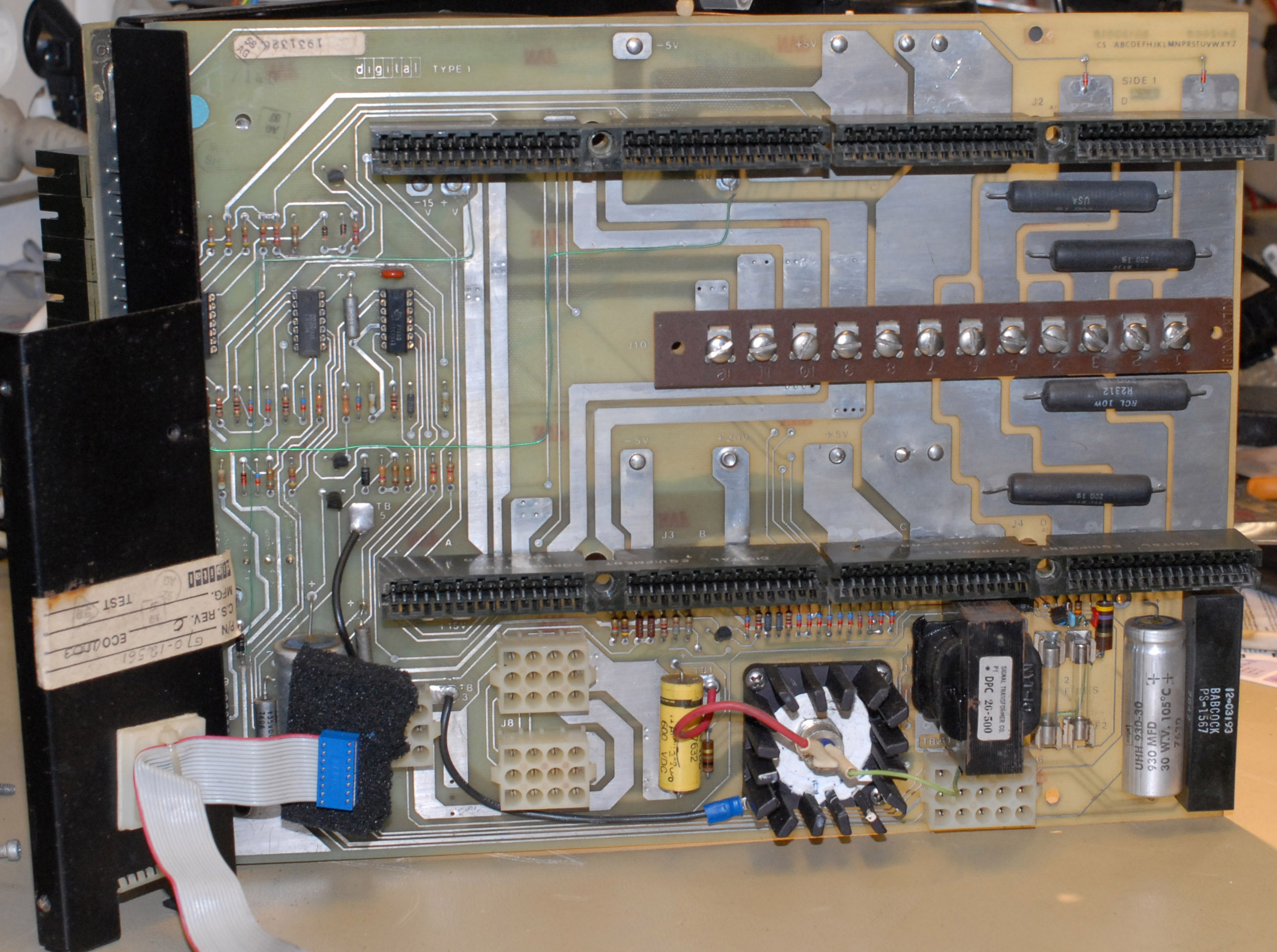 The BA8C power distribution board. On the bench for the third time since it wasn't possible to turn the machine off. Changed the transistor and the opto coupler in lower right corner.

When I got this machine it had a KK8A CPU (since it's a model 420). When I first got it running it was with this CPU. During the spring and summer 2016 I got my hands on first a KK8E CPU then a KE8E EAE extension. Those are now working. 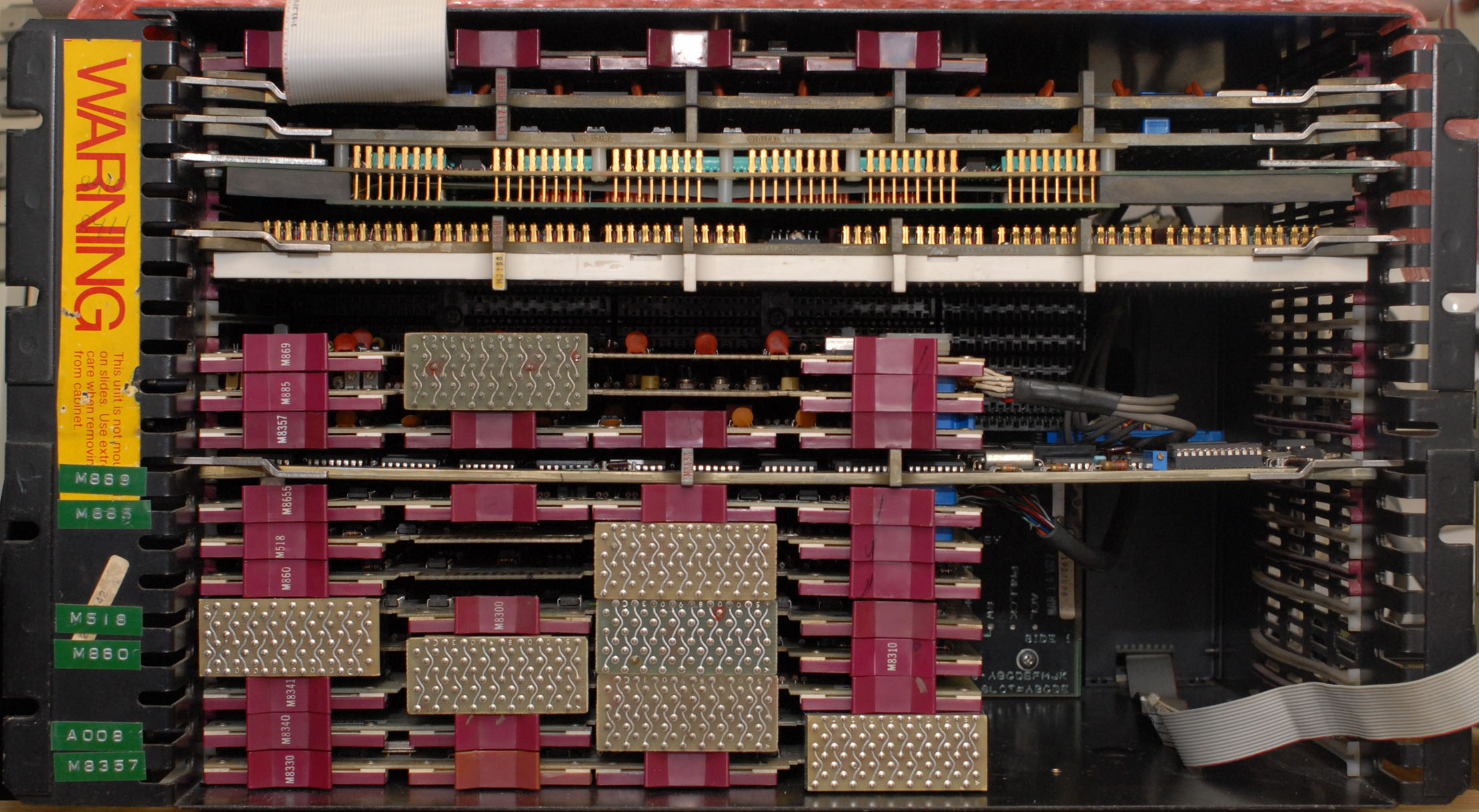 There is always a couple of more options that could be nice to have.

The hardware I have makes it possible to run Spacewar. I just had to give it a try!

Documentation on DEC machines are very good. I was able to find all documentation, test software and others on the internet. That helped a lot!