I got this machine in working condition during the spring of 2018. It's built from leftovers from my other PDP8A, parts bought from Ebay and parts from two chassis that I got from Mattis Lind. 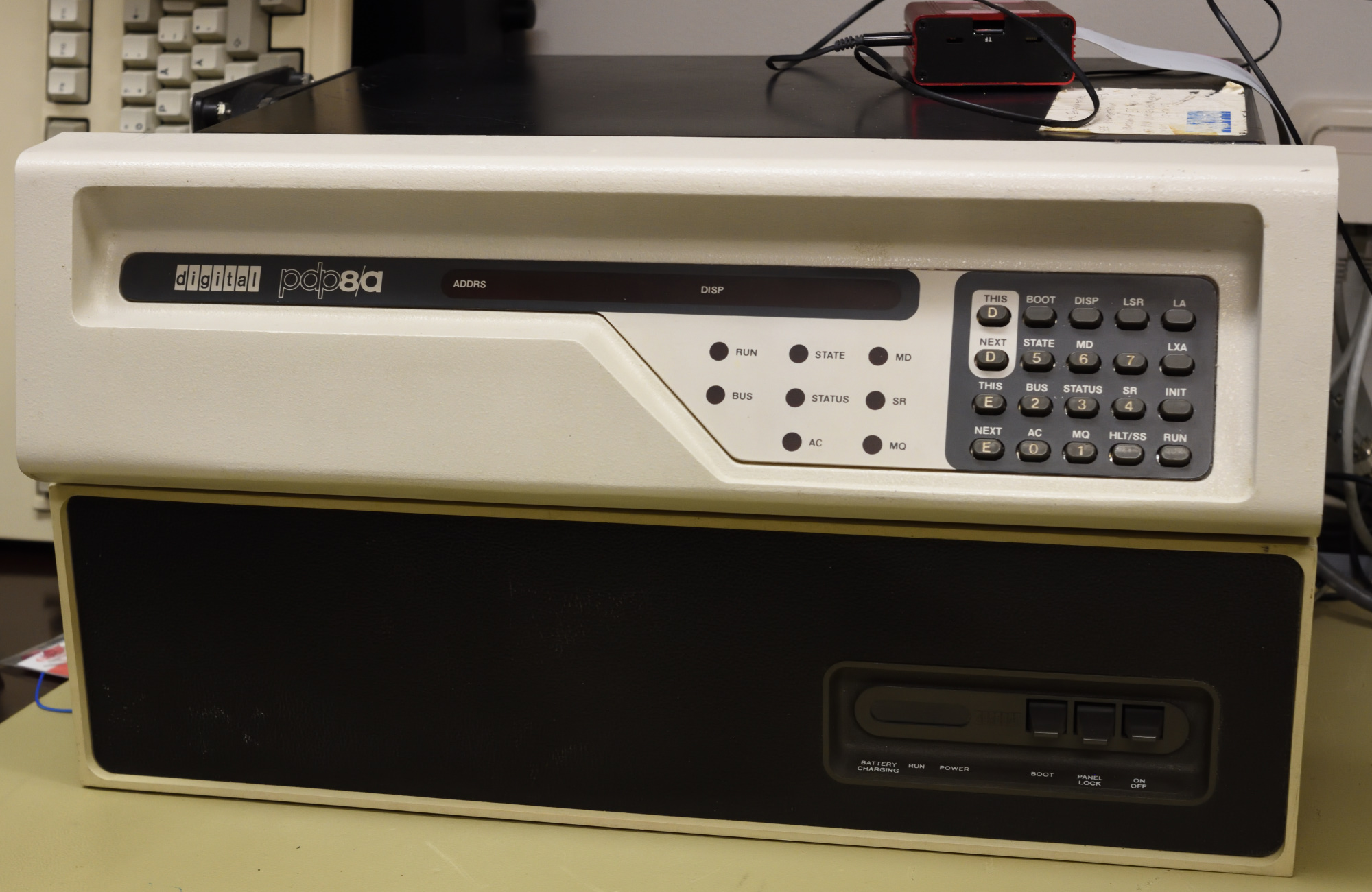 The configuration of this computer is the smallest possible to be able to run OS/8 over a serial port using Kyle Owens OS/8 Disk Server.

This was my fastest and easiest PDP8 restoration so far. Firstly I had knowledge about the PDP8A before I started and secondly I had also built up a stock of spare parts for fixing the most common failures. The KK8A (CPU M8315) and KL8AJ (M8655 serial card) boards where reparied and tested when I restored the first PDP-8A. The DKC8A where bought as functional and worked fine.

Out of the two boxes I got one nice clean one. I tested the power supply with a dummy load after I removed the lead batteries and reformed the big capacitors. The only thing I had to fix was the IC-socket where the cable from the limited function panel connects to the board. It was a bit flaky. The G8016 power regulator board has four big lead battery cells used for RAM memory backup. I decided to desolder them and not replace them. 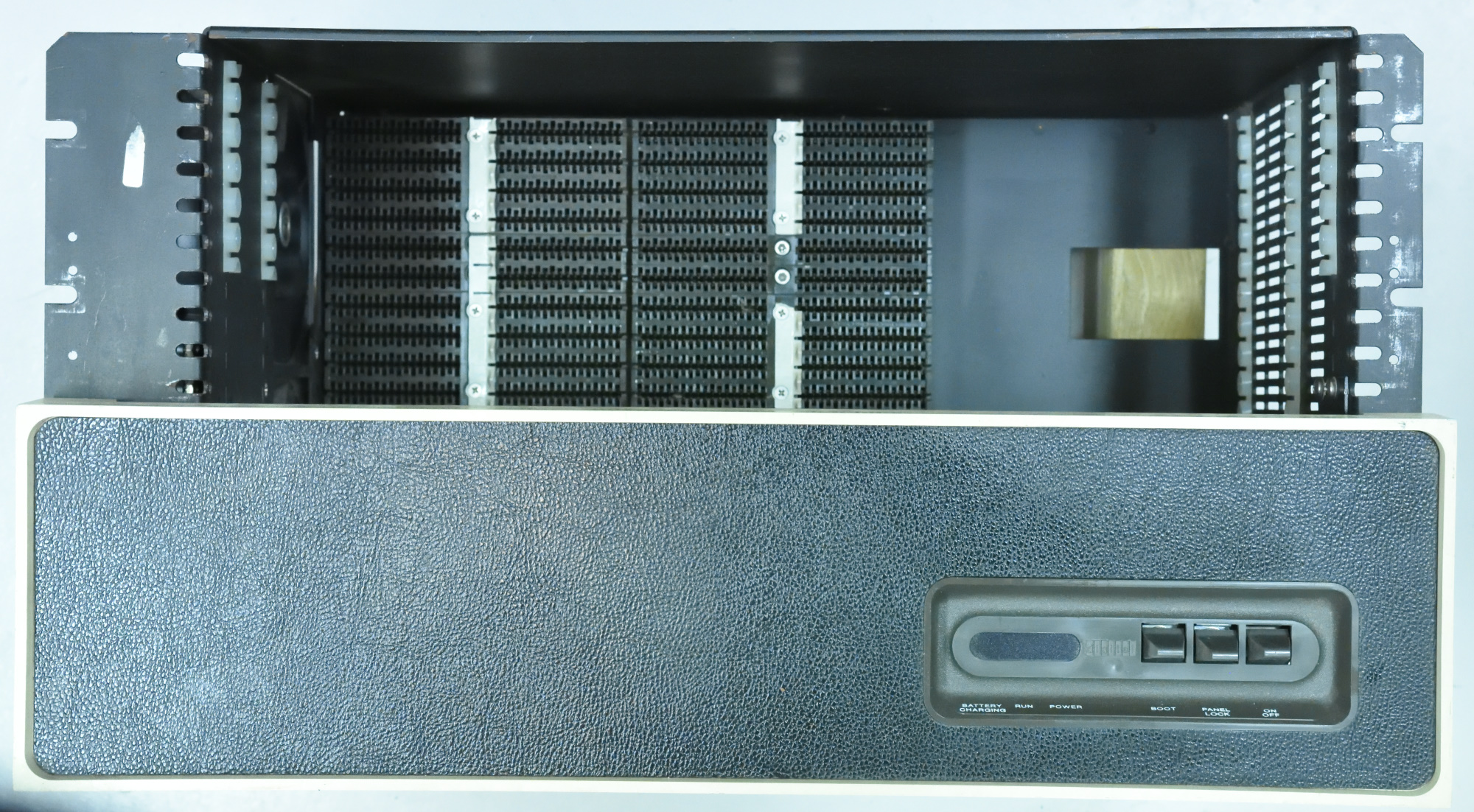 One cleaned up box 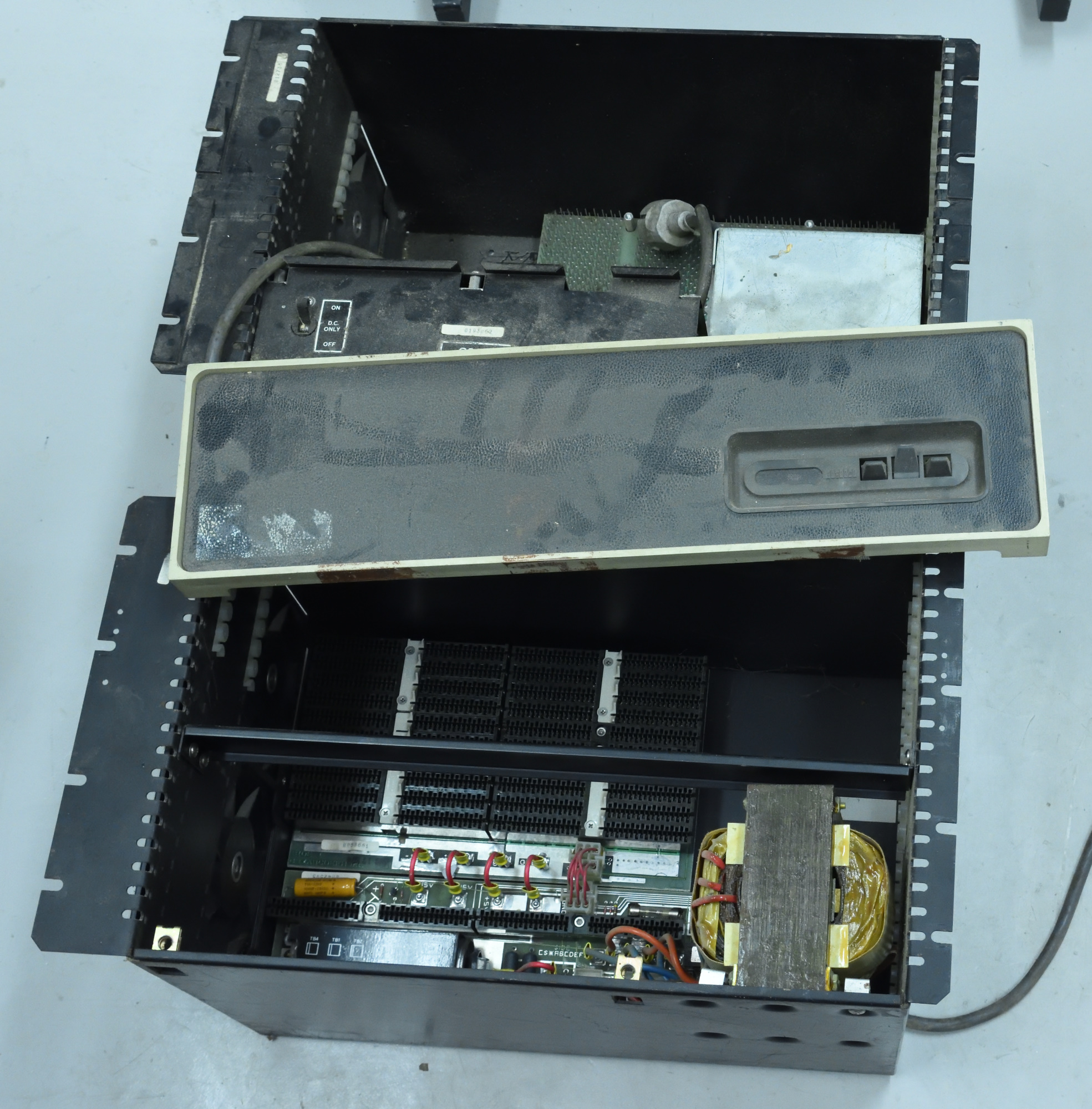 The boxes I was given from Mattis

This board was bought and shipped overseas as working with guarantee but it turned out to be broken. When I tried to load extended address I always got bit 0 as one. This was a bit tricky to debug since I couldn't find a schematic that covered the verison of my board. So I started to measure the signal that I suspected from the edge connector into the board. I saw that it passed through this region with scratces and I got infinitive resistance when I measured one track. 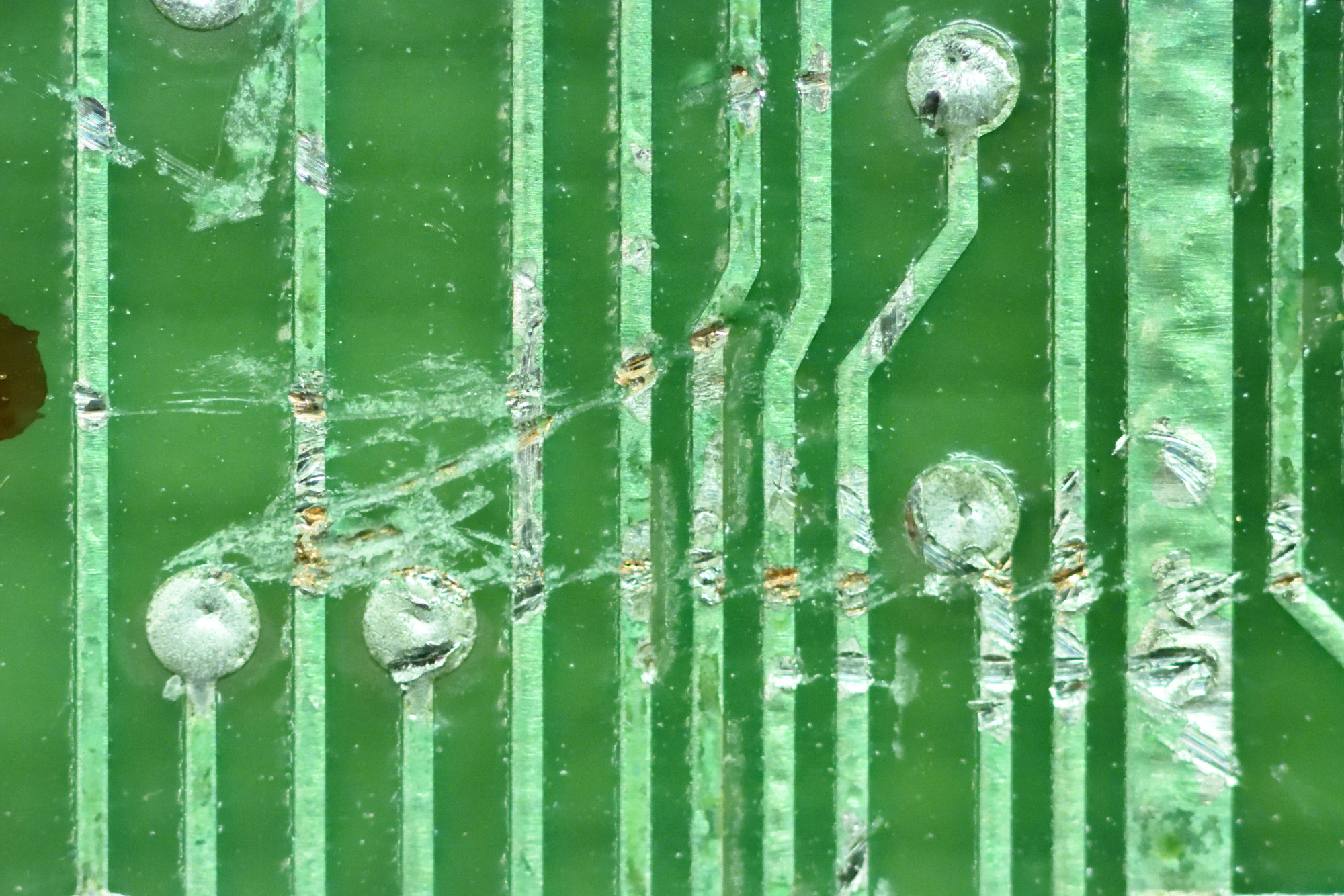 With light from the back of the board and some magnification I found a tiny scratch. 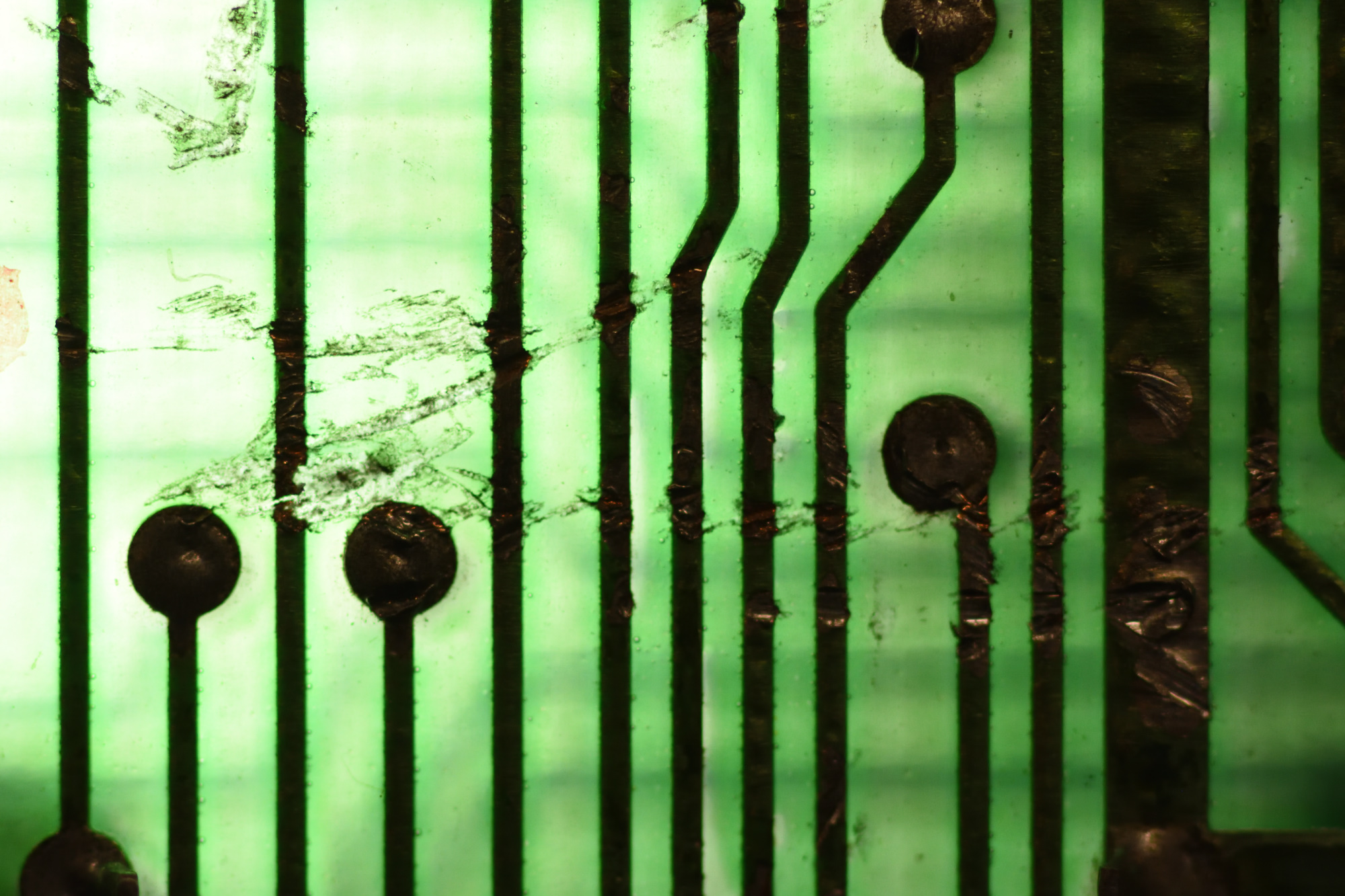 A small piece of wire wrap cable soldered to the track, sealed with nail polish. 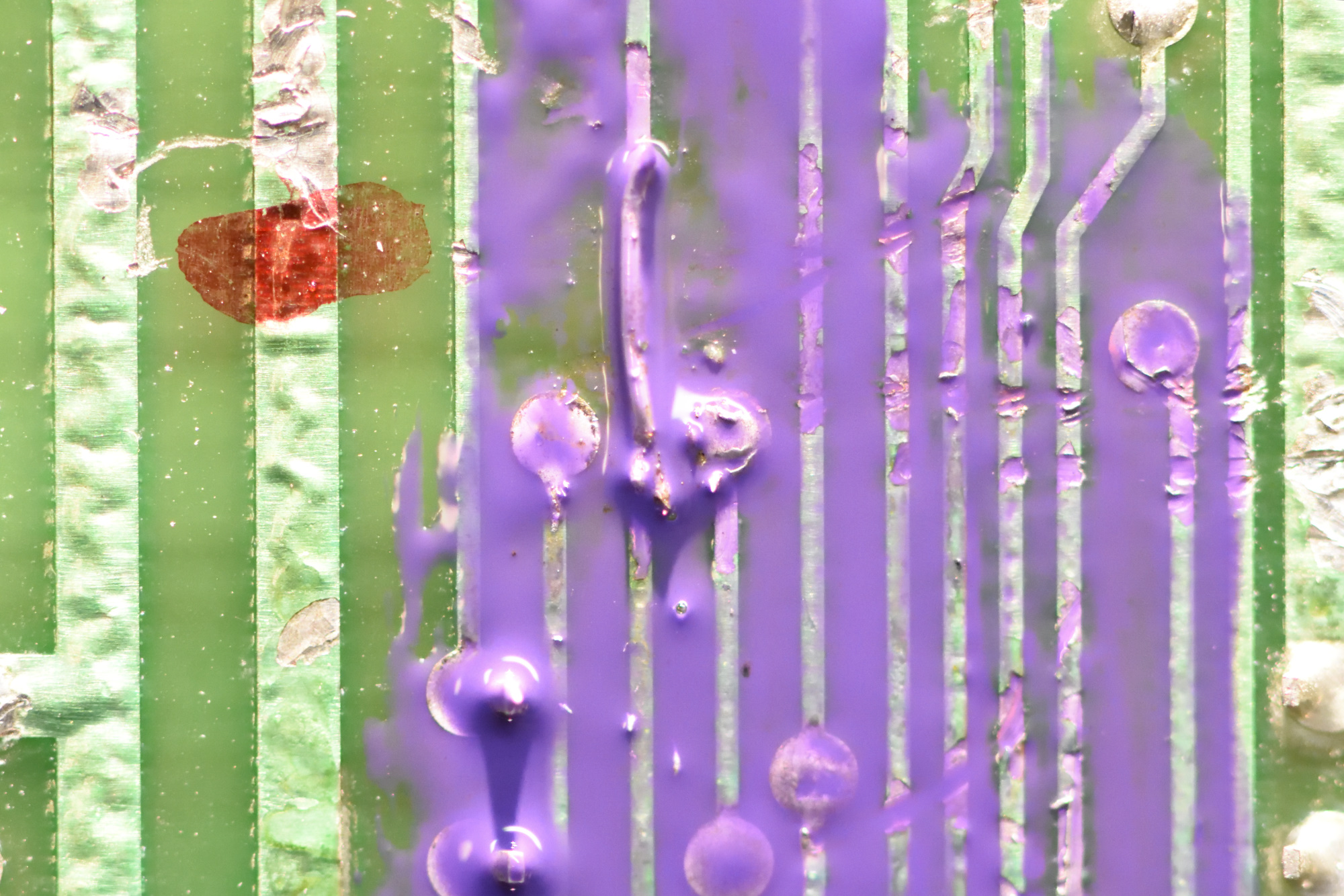 No trasparent nail polish at home, borrowed purple from my kids! Testing and it works!

I found some good information about the BC01V RS232 Cable here. Douglas W. Jones, The BC01V RS232 Interface Cable have also a good page on the same subject. I need to build two new ones, later.

I got two memory boards from Mattis, one was marked as broken and one was untested. Both boards turned out to have multiple defects. 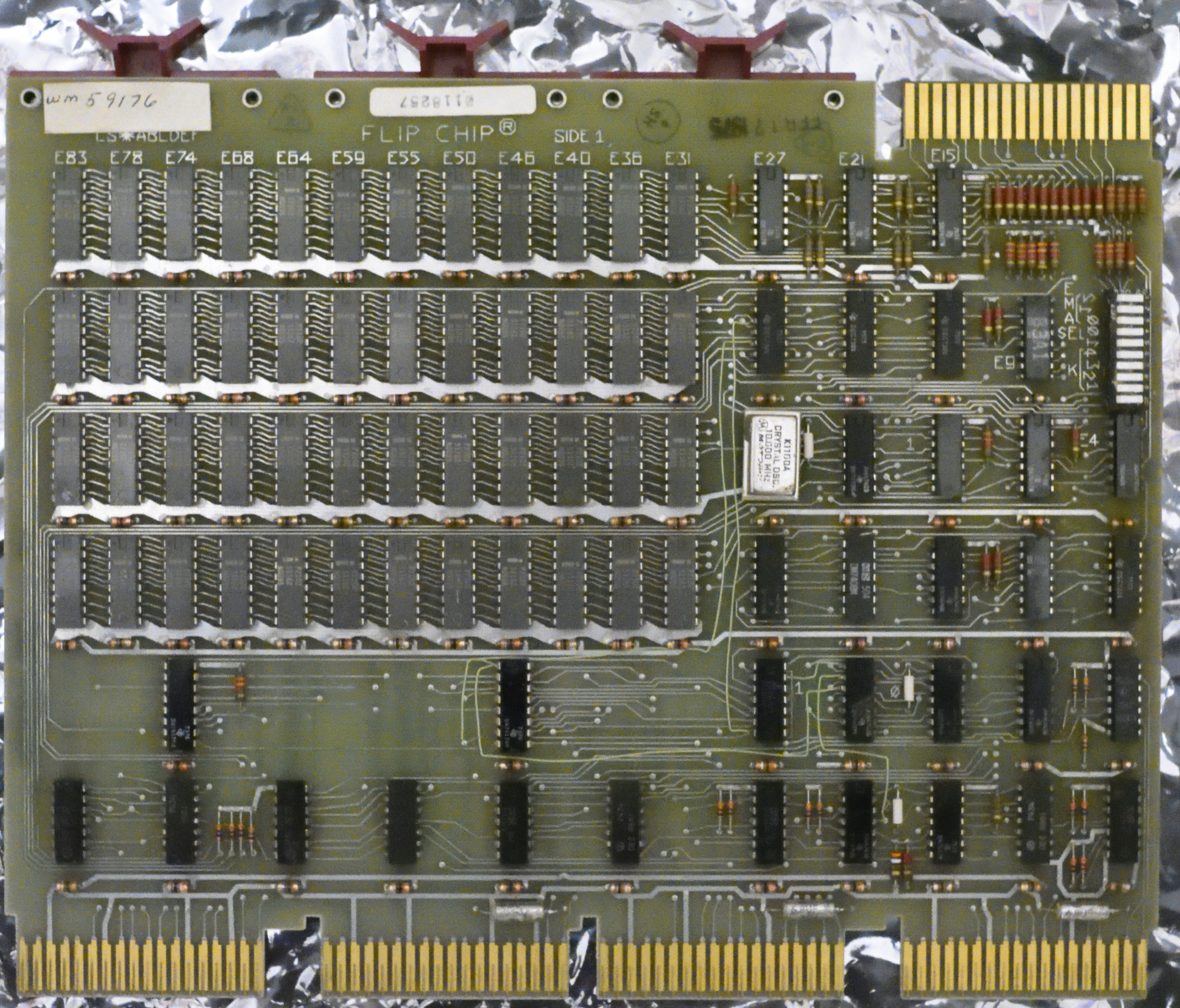 An old 4K memory board

First board, nontested, turned out to have two defects, first I got no reaction at all trying the board. Turned out to be a switch that had infinite resistance in "ON" position. Then it was possible to save things into the memory, but not all bits. Four of them where broken. The same four bits are driven onto the MD-bus with the same (broken) 8881. 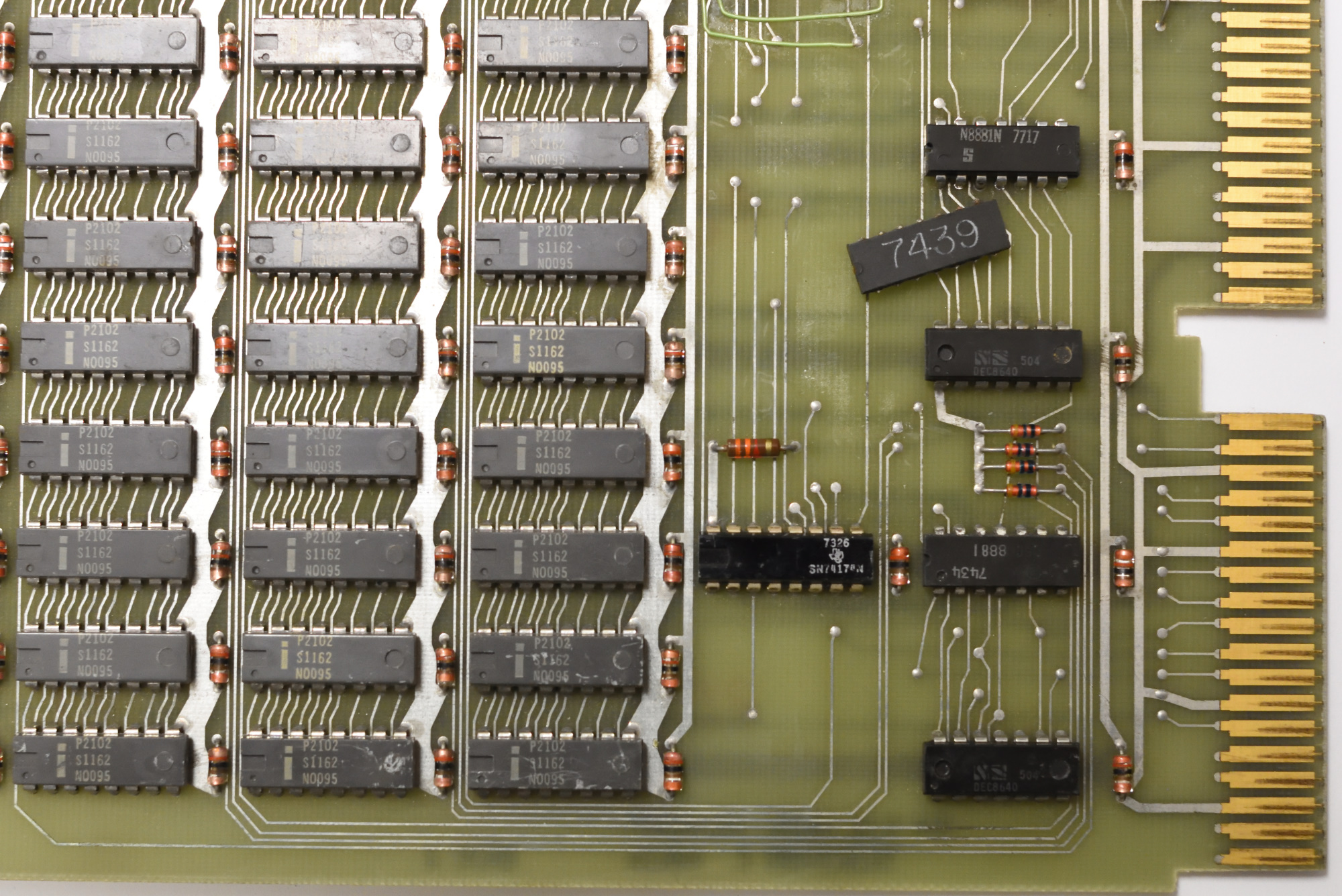 On the second board I found a cold solder on the DIP switch. Fixed, but the board where still not functional. It just behave differently. 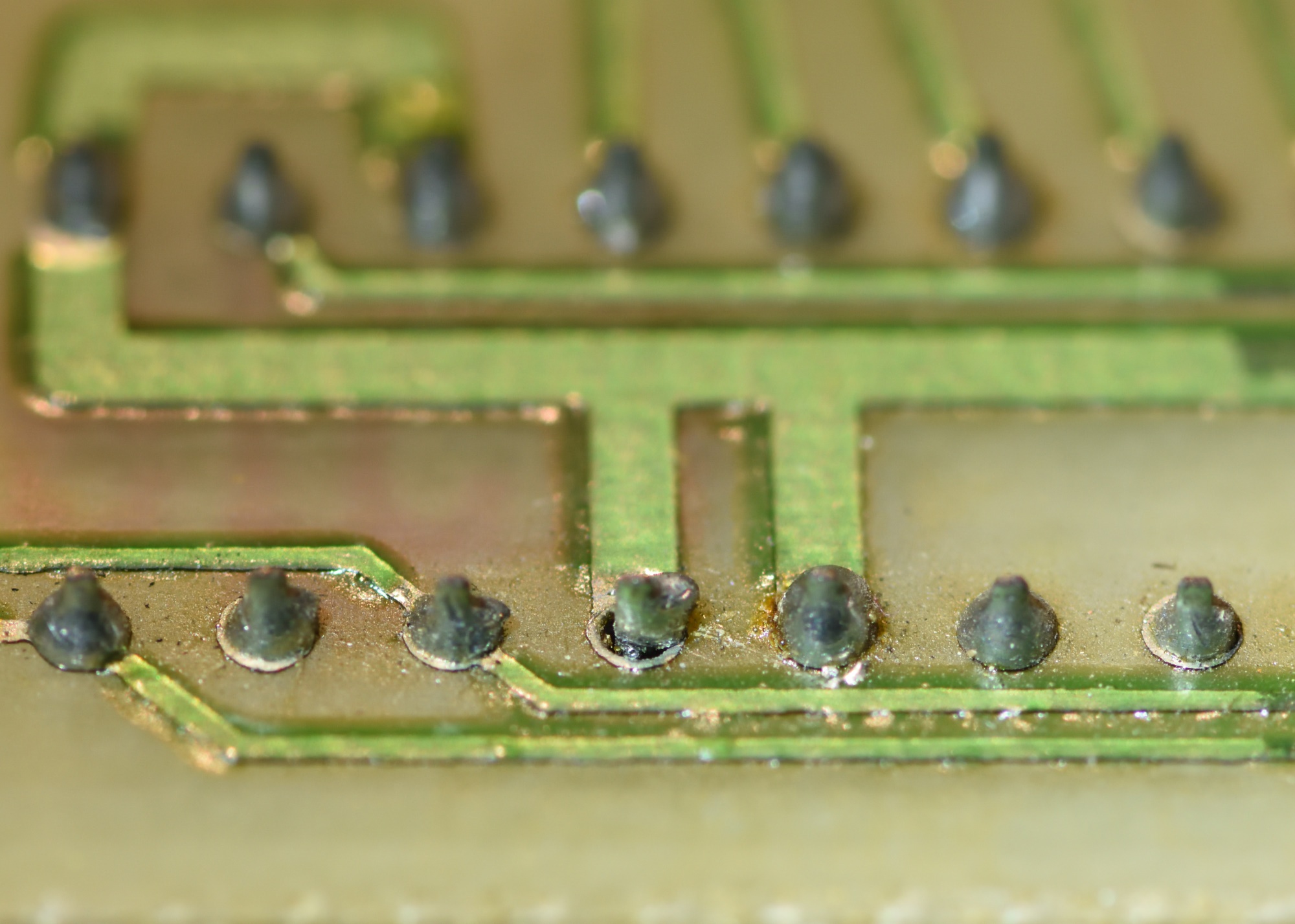 After some debugging I found a bad 7400 that controls the signals to the latches that passes the data onto the MD-bus (the MMI MEM CLR L signal). I found this pretty quickly since I had a repaired and working board to compare with. Building a new memory board

After I got the two MS8A 4K boards to work, I decided to build one of those 32K omnibus RAM boards that Vince Slyngstad made a group buy of. Anyway I didn't by a kit back then so I took the CAD-files from his site and ordered some new ones. They are almost the same as Vinces order, but I fixed the problem with the battery sitting too close to the edge first. This is the memory board that I use in the machine. It has two advantages over the MS8-AD cards, first it has battery backup (well, the 8A/100 has it as well if I solder in new lead cells) and secondly it takes only one slot in the back plane instead of two. A new shiny memory board

The two ROM's and the logic on the board basically simulates the operations that can be made on the front panel. The logic can "Load address", "Load extended address", "Deposit" and "Start" commands with data attached based upon the content of the ROMs. Up to 128 commands can be stored in the ROM's. Dumps of the two usual PROM's used on this board can be found at Bitsavers. I wrote a litte C-program that can take the content of to ROMs and make readable output of it. I also made boot-proms for booting os8diskserver, I have those in my machine now and its very comfortable to boot without having to type in the boot loader every time. The files can be downloaded here:

During my research I found Herb Johnson's good write up about the 8A boot-PROMs. The boot PROM format is explained in the KM8-A Engineering drawings.